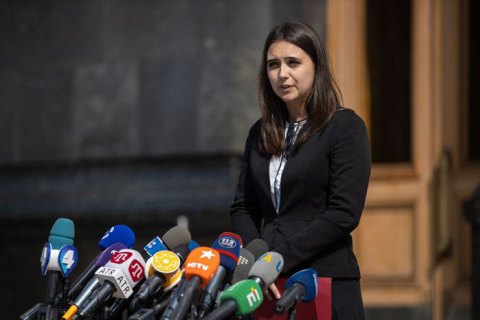 Yuliya Mendel, the spokesperson for President Volodymyr Zelenskyy, visited the Prosecutor-General’s Office (PGO) for questioning on 1 June but refused to testify, Ukrainian News has learnt from a source.

Mendel was called in for questioning in connection with her statement about the shelling of civilians in Donbas by the Ukrainian military.

"During the questioning, Mendel refused to testify, disclose the source of the published information, having said that the questioning is politicised and can be used against her, although the questions which were asked did not concern her personal life," the PGO said.

Earlier, Mendel said on the air of one of the TV channels that there are cases when the Ukrainian military, responding to militants' provocations in Donbas, shoot at civilian targets, as a result of which people die.

Earlier, Mendel said that Zelenskyy’s words about Russia's loss of control over the militants in Donbas had been misinterpreted, but acknowledged that the president’s office should be more careful with the wording of its statements.

Mendel was appointed the presidential press secretary following a competition. She worked for The New York Times, Politico and Forbes Ukraine, as well as a number of Ukrainian TV channels.