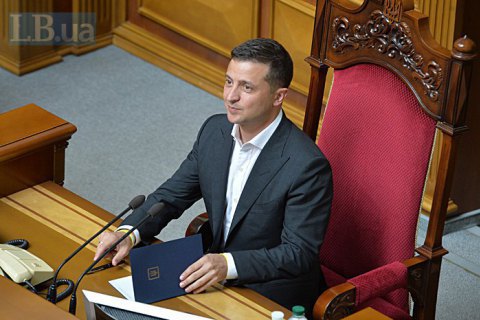 President Volodymyr Zelenskyy has threatened that he will dissolve parliament in a year if it does not live up to expectations. At the same time, Zelenskyy expressed the hope that he would not have to do this.

"There is only one question - how exactly do you have a chance to get into textbooks? As a parliament that did the incredible, that implemented everything which has not been done over the previous 28 years. Like a parliament where there were no fights, absenteeism, button-pushing, but only constructive and daily painstaking work for the benefit of the Ukrainian people," he said in his extraordinary state of the nation address.

"Or! Or you will be a parliament which lasted the least - one year. In fact, this is your probationary period. Trust me, I already know that dissolving parliament is not so scary. I sincerely hope that this will not happen. Let's do it together," he added.

Zelenskyy concluded his speech with the words "Glory to Ukraine!".

Parliament of the ninth convocation, in which his Party of the Servant party holds the majority, has convened for the first time today.