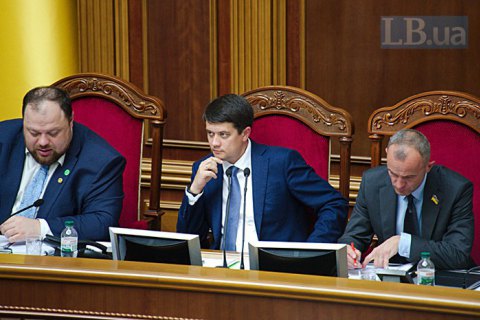 The Ukrainian parliament of the ninth convocation has convened for the first time today.

The session started with 405 MPs taking the oath of allegiance to the Ukrainian people.

MPs have already formed five factions and one deputy group.

The propresidential Servant of the People faction, which has 254 MPs, is headed by Davyd Arakhamiya, his first deputy head is Oleksandr Korniyenko. Given its overwhelming number, the faction assumed the powers of the parliamentary coalition.

The Opposition Platform-For Life faction has 44 MPs and is co-chaired by Yuriy Boyko and Vadym Rabynovych.

The Fatherland faction has 25 MPs and is headed by Yuliya Tymoshenko.

The European Solidarity faction has 27 MPs and is co-chaired by Iryna Herashchenko and Artur Herasymov.

The Voice faction has 17 MPs and is headed by Serhiy Rakhmanin.

The For the Future group has 23 MPs and is co-chaired Viktor Bondar and Taras Batenko.

Parliament has elected Dmytro Razumkov, head of the Servant of the People party, as its speaker.

Ruslan Stefanchuk (Servant of the People) has been elected the first deputy speaker.