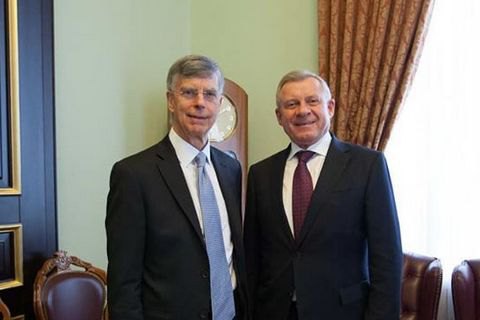 According to the NBU press service, they briefed Taylor at their joint efforts with the government to ensure economic growth. They also touched on the court cases against the former owners of bankrupt banks.

"Yakov Smoliy noted that there are obvious attempts by the interested individuals, possibly from among the former owners of the banks, to prevent cooperation with the IMF by means of information attacks and court rulings seeking to discredit the NBU and financial reform," the NBU press service said.

Smoliy added that despite the stable improvement of the macroeconomic situation in Ukraine, continued cooperation with the IMF is one of the top priorities for the Ukrainian authorities,

"The IMF programme is not only money. What is important is that it is the anchor for reforms in Ukraine which are extremely necessary for stable economic growth," he said.

Last week former Privatbank owner Ihor Kolomoyskyy said in an interview with The New York Times that Ukraine could replace the IMF money with Russian funding.