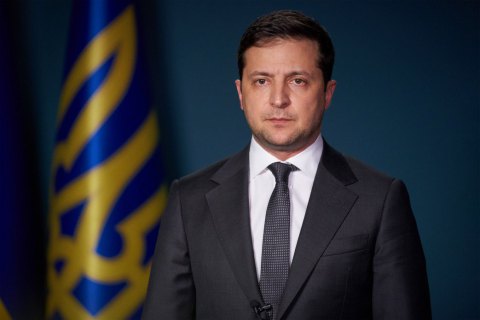 Ukrainian President Volodymyr Zelenskyy has pledged to "return all the dead to their loved ones" and ensure punishment for those who downed the Ukraine International Airlines flight PS 572 from Tehran to Kyiv on 8 January, killing all 176 people onboard.

The following is the text of his statement as published on his official website:

I have just had a phone conversation with President of Iran Hassan Rouhani.

He officially apologised to all of Ukraine and the relatives of the deceased, and acknowledged the fact that Iran had shot down a Ukrainian Boeing-737.

Now I want and I am finally able to tell you in detail about all the actions of the Ukrainian authorities, starting from the tragic morning of January 8.

Immediately after the plane crash, the emergency operations centre at the NSDC of Ukraine was created and started working.

The ambassador and consul of Ukraine in Iran arrived at the scene at Imam Khomeini Airport.

An extraordinary government meeting was held to decide on the creation and deployment of a search and rescue group to Iran.

We have sent to Tehran the best specialists of our country with extensive expertise.

The Office of the Prosecutor General of Ukraine appealed to Iran, Canada, Sweden and the United Kingdom to establish an international investigation group.

On January 9, at 3:30 our search and rescue team arrived in Tehran and started its work at the scene of the disaster 2 hours later.

I had a conversation with the President of Iran regarding a clear and full interaction with our experts. They gained access to the debris of the aircraft, black boxes, records from radars and dispatchers from the flight control centre.

In the morning of January 9, the NSDC Secretary outlined 4 major versions, including the possibility of a Ukrainian plane being hit by a missile.

DNA of relatives of the victims was collected very quickly to identify the bodies of the deceased. In particular, of the cabin crew member whose relatives were in the temporarily occupied territory.

I have held working consultations with our international partners - the Prime Ministers of Canada, Sweden, the United Kingdom, the Presidents of Iran and Afghanistan, and have emphasised the need for joint action to investigate the circumstances of this tragedy.

In the evening, statements came from US, Canadian and UK leaders about the alleged downing of Ukraine's Boeing.

We urged all international partners to provide data that would confirm this version.

We worked systematically, without hysterics for the sake of one thing - achieving the result, namely finding out the truth about the circumstances of the plane crash.

On January 10, I had a conversation with United States Secretary of State Mike Pompeo and a meeting with US Chargé d'Affaires in Ukraine Kristina Kvien who provided me with important and useful information for investigation.

I want to commend the work of Ukrainian experts in Iran.

They worked and continue to work selflessly, diligently and around the clock. Their high professionalism and promptness, convincing preliminary findings and evidence found in Tehran did not allow to hide the truth.

Today, the leadership of the Islamic Republic of Iran has acknowledged the fact of shooting down the Ukrainian plane and admitted its fault in the plane crash.

This has also been undoubtedly aided by the support of international partners and the steadfast position of the world community. For this I express my sincere gratitude to the leaders of the US, Canada, Great Britain, other countries, international organisations - on behalf of the Ukrainian people.

At present, a group of Ukrainian experts is continuing its work.

A series of steps still need to be taken to complete the investigation.

They are currently trying to rebuild the plane.

Returning to the conversation with the President of Iran.

We agreed that right now he would order to finish the identification of the bodies of the deceased and prepare them for the return to Ukraine as soon as possible together with Ukrainian experts,.

This is to happen shortly.

We also agreed to start working together to decipher two onboard recorders - "black boxes".

We agreed on full legal and technical cooperation, including the issue of compensation.

We agreed that nobody would avoid punishment.

The Office of the Prosecutor General of Ukraine opened an investigation for the murder of Ukrainian citizens.

The Government will provide financial assistance to the families of the victims.

The state will also assist them in receiving compensation from the carrier, insurance companies and the Islamic Republic of Iran.

I call on all international partners of Ukraine, the entire world community to be one and persistent until the full and final investigation into all the circumstances of this disaster. All of us need it.

For the sake of a human who should feel safe in this turbulent world - on earth, in water or in the air.

For a human and human life must be of the highest value to any government, any state, any politician.

In these difficult days for each of us I want to say the following.

I will return all the dead to their loved ones, they will be able to bid a proper final farewell. We will honour their memory.

All perpetrators will be punished.

We will return to Ukrainians not only a sense of security and justice, but also confidence that Ukraine will always protect you in any corner of the planet.