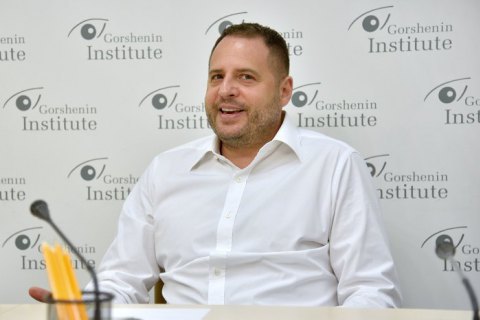 Volodymyr Zelenskyy's aide Andriy Yermak has denied that during his visit to Oman, the president met the chairman of the political council of the pro-Russian Opposition Platform-For Life party, Viktor Medvedchuk. According to Yermak, Zelenskyy's return to Ukraine was delayed by the closure of the air corridor after the crash of the Ukraine International Airlines passenger plane in Iran.

"The president returned as quickly as possible, the situation in the region permitting. As soon as the air corridor was opened, which was limited due to the tragedy, the president flew out. I would also like to note that since it was a private trip by the president, not a penny of the budget money was spent either on his way to or from," Yermak said in an interview with Ukrayinska Pravda.

"Any speculation, as well as conspiracy theories about the plane, Medvedchuk, where and how this plane flew, are groundless and are the continuation of dirty technologies that were also used during the presidential campaign. Neither their customers nor methods have changed," he added.

He also noted that right from the start, Ukraine had treated as one of the main ones the version that the plane had been downed by an Iranian missile.

Yermak is convinced that Iran pleaded guilty "as a result of the prompt, professional and efficient work of the Ukrainian group in Tehran, which was also informed in detail and comprehensively by the partners of Ukraine".

At the same time, he noted that, despite Iran's statement that the plane was hit by mistake, Ukraine is yet to establish whether the attack was errant or deliberate.

On Christmas, Zelenskyy went to Oman on the pretext of a working trip. After media reported that he and his family went for a discreet vacation on the coast of the Gulf of Oman, the president’s office said that the head of state had left for Oman on a working trip.

It took Zelenskyy a day to return to Ukraine after the Ukraine International Airlines Flight 752 was downed shortly after takeoff from Tehran on 8 January. All 176 people onboard were killed.

Medvedchuk's plane was spotted in Oman around the same time, where he arrived with a "delegation from Moscow", according to the Schemes investigative journalist group. Medvedchuk said that the plane was used by his daughter's family.