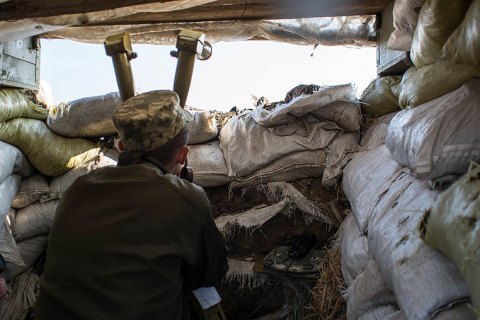 On the morning of 18 February, the Russian occupying troops carried out a massive attack in Luhansk Region, the Joint Forces Operation HQ has said.

"The Russian occupiers used artillery systems, including by firing six projectiles from 152-mm artillery, 18 122-mm projectiles. In addition, the invaders fired at positions of our defenders more than 164 bombs from 120-mm mortars and 44 bombs from 82-mm mortars. Also, the enemy fired grenade launchers of different systems and heavy machine guns," the HQ added.

In addition, near Novotoshkivske, the invaders made 56 shots at our positions from tank weapons. In the combat area, enemy sabotage and reconnaissance groups carried out assault actions.

During the attack, one Ukrainian serviceman was killed, three wounded and two suffered concussion. The fight lasted for about five hours.

General Staff Commander Ruslan Khomchak said that there was no threat of an attack by militants. President Volodymyr Zelenskyy described the attack as an "act of provocation" aimed at disrupting the peace process.