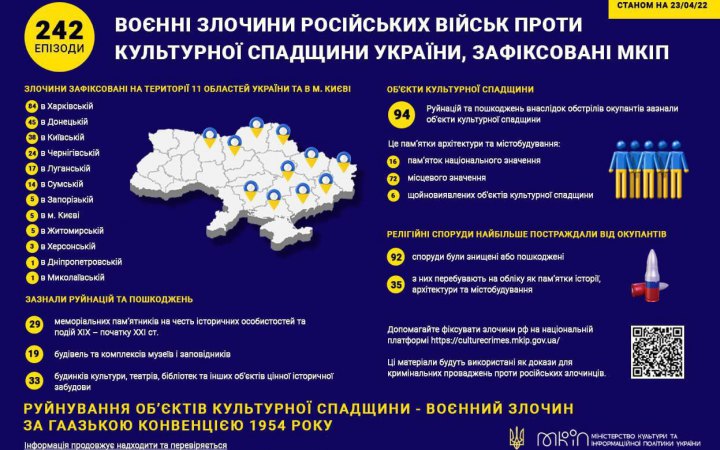 As at 23 April, Saturday, 242 episodes of military crimes of the russians against Ukraine’s cultural heritage have been documented.

It was reported by the Ministry of Culture and Information Policy of Ukraine.

“The list of damages to the facilities of cultural heritage is being completed regularly with new episodes. Recently, Khortytsia island in Zaporizhzhia was attacked by the enemy’s missiles. Before the war, the museum on the island was renovated under the “Great Restoration” program. This place is special for each Ukrainian, as it is the Cossacks center,” goes the news.

In the Kyiv region, an early 20th-century building has been damaged – Makariv public library. In the Kharkiv region, the building of the Teacher’s house dating back to 1925 has been damaged, like, unfortunately, many more historical monuments.

“Information on damages and destructions from the temporarily occupied territories and zone of active combat actions is still difficult to obtain. But some information is received from the Ukrainians. The Ministry, in its turn, verifies and systemises all data,” they said at the Ministry.

We remind that the destruction of facilities of cultural heritage is a military crime as provided for in the 1954 Hague Convention.

The occupiers took to Donetsk a unique collection by Yukhym Kharabet from the Mariupol Museum of Medallic Art.

The russian army has also destroyed the archives of Vyacheslav Chornovil near Bucha.

Besides, due to shelling by the enemy, the archives of Mykola Plakhotniuk, a dissident of the sixties, are lost.