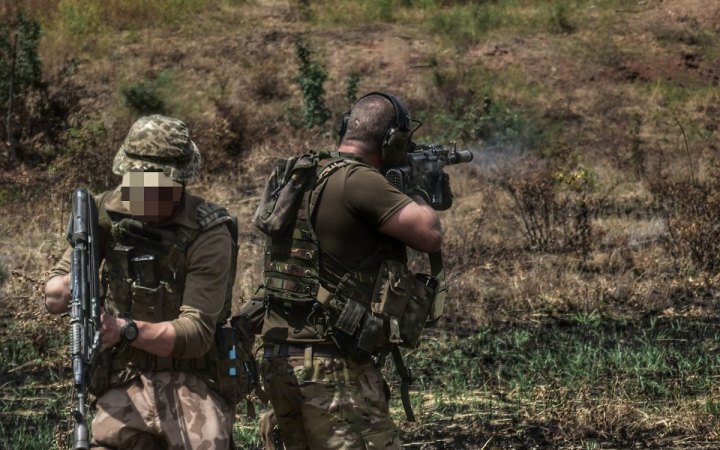 Photo: Ground Force of the UAF

The enemy continues to focus its efforts on attempts to fully occupy Donetsk Region, organize Defence and hold the captured territories, as well as disrupt the active actions of the Defence Forces in certain areas - the General Staff of the Armed Forces of Ukraine informs at the beginning of the 210th day of the heroic resistance of Ukrainians to the russian military invasion, according to a Ukrainian News Agency report.

The occupiers also take measures to regroup its troops, constantly conduct aerial reconnaissance, fires on the positions of our troops along the contact line," the report reads.

Over the past 24 hours, the enemy launched eight missile strikes, 35 airstrikes, and more than 120 MLRS attacks on objects in the territory of Ukraine, violating the norms of international humanitarian law, laws and customs of war.

Over the past day, the russian strikes damaged the infrastructure of more than 50 settlements, including Oskil, Slovyansk, Siversk, Oleksandrivka, Soledar, Bakhmut, Velyka Novosilka, Vremivka, Vuhledar, Stepne, Zaporizhzhia, Nikopol, and Ochakiv. The enemy tried to hit the Slovyansk TPP with strikes on Mykolaivka town.

There is still a threat of enemy airstrikes and missile strikes on the territory of Ukraine.

The situation in the Volyn and Polissia areas has not changed.

In other areas, the enemy continues shelling from tanks, mortars and artillery of various types:

Thanks to the successful actions of the Defence Forces, the enemy continues to suffer manpower and equipment losses. In particular, as a result of strikes on enemy personnel and military equipment clusters on September 19, damage to the personnel cluster in the Polohy area, numbering more than 20 people; ammunition depot, five units of military equipment, and more than 20 military personnel in Melitopol district; 10 units of military equipment and more than 10 servicemen of units of the occupation forces in the area of Kamyanka were confirmed. The destruction of the commandant's office in the town of Svatove, Luhansk Region, where the enemy organized a headquarters and ammunition depot, was also confirmed.

Forced mobilization of residents is underway in the temporarily occupied territories of Donetsk and Luhansk Regions to replenish the units of the occupation forces.

Over the past day, our troops repelled enemy attacks in the areas of Vesele, Kurdiumivka, Mykolaivka Druha, Bakhmutske, Zaitseve, Mayorsk, Pervomaiske, Marinka, and Novomykhailivka.

During the past 24 hours, the Air Force of the Defence Forces launched more than 20 strikes on enemy positions. It was confirmed that 19 clusters of enemy manpower and military equipment and two positions of anti-aircraft missile systems were hit. In addition, the air Defence units destroyed one Su-25 enemy aircraft and four UAVs.

Missile troops and artillery inflicted fire damage on 40 enemy objects over the past day, including 20 clusters of personnel, weapons and military equipment, 13 areas of artillery build-up, and seven ammunition depots. The enemy losses are being clarified.

Ukrainian defenders shot down a russian Su-25 and an Iranian-made kamikaze drone.