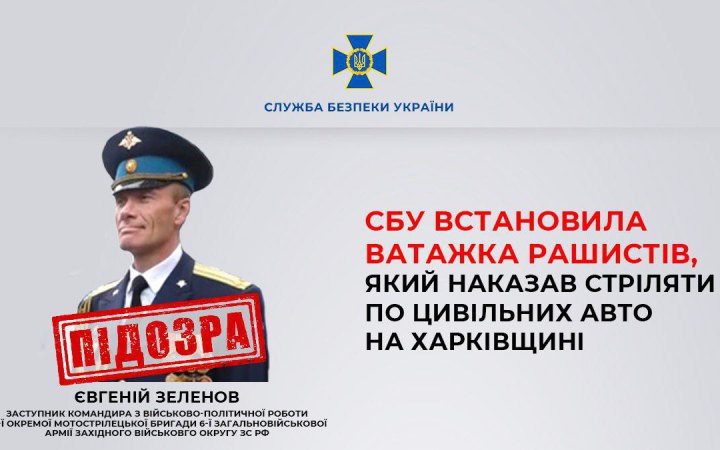 The Security Service of Ukraine (SBU) has established the identity of the Russian officer who at the beginning of the full-scale invasion ordered to shoot Ukrainians who tried to leave Kharkiv Region.

"The war criminal was the deputy commander for military-political work of the 25th Separate Motor Rifle Brigade of the Western Military District of the Russian Armed Forces, Lt-Col Yevgeniy Zelenov," the SBU said.

On 24 February, he commanded one of the Russian battalion-tactical groups, which conducted active hostilities against units of the Ukrainian defence forces in the east.

According to the investigation, his group approached the Kharkiv ring road from the village of Lyptsi and blocked the entrance to the regional centre.

Local residents, who were coming from the border settlements of the region, demanded that the Russians unblock the traffic and resisted the occupiers. In response, Zelenov ordered his subordinates to open fire on the cars with civilians.

As a result, one person was killed, at least two were heavily wounded.

Zelenov is suspected of committing a crime under Part 2 of Article 438 (violation of the laws and customs of war, combined with premeditated murder) of the Criminal Code of Ukraine.