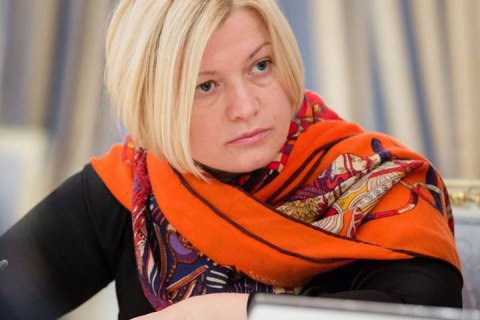 The self-proclaimed separatist Donetsk People's Republic has disrupted an Easter exchange of 25 people in its captivity for 50 separatists detained by Ukraine, Kiev's representative at the humanitarian subgroup of the trilateral contact group on a Donbas settlement, Iryna Herashchenko, has said.

"Neither the OSCE, nor Viktor Medvedchuk who is also working in the humanitarian group, nor I or the SBU received any response to our lists and suggestions," she said on Facebook.

The exchange was "disrupted in a mean manner" at today's humanitarian group meeting, she added.

"The representatives of certain areas of Donetsk and Luhansk regions suggested that we discuss gas and other matters which have nothing to do with humanitarian issues, then they said that they would respond to our proposals after the holidays, not earlier than 12 May!!!!!! Then they said that they demanded a release of terrorists involved in the terror acts in Odesa and Kharkiv and in exchange they would give us the list of hostages, in which only seven names are familiar to us and which does not include all those heroes for whose release we have been struggling for for a year now," she said.

The separatists did not answer anything with regard to UN employee and theologist Ihor Kozlovskyy and rejected any initiative on heavily ill people.

She insists that the contact group should focus on the prisoner exchange at its 29 April meeting.