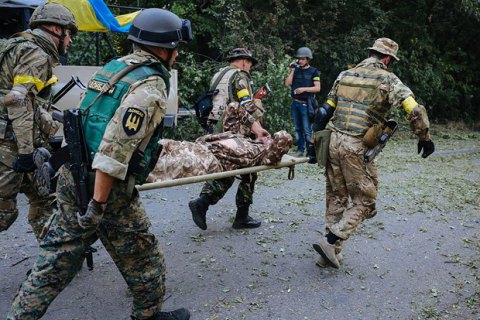 The situation in the antiterrorist operation (ATO) area is stable without a tendency towards escalation, the ATO HQ press centre has said.

It said that the Russian occupying trips had not decreased a number of attacks on the Ukrainian positions, receiving asymmetrical response from the Ukrainian Armed Forces.

In the Mariupol sector, the militants fired with grenade launchers and heavy machine guns on the Ukrainian positions near Vodyane in the Mariupol sector last night and faced tough response. In the course of an engagement, one Ukrainian serviceman was killed and one wounded. They also used a 120-mm mortar near Novotroyitske at night.

In the Donetsk sector, the enemy fired with grenade launchers on the ATO strongpoints near Opytne and with an infantry fighting vehicle on the Butivka mine.

The militants carried out more shooting attacks in the Luhansk sector than before. Twice they used machine guns near Krymske. They fired with 82-mm mortars on the Ukrainian positions near Novotoshkivske, Novooleksandrivka and Katerynivka. They used mortars of various systems near Troyitske.

Over the past day, the militants violated the ceasefire on 17 occasions. One Ukrainian serviceman was killed, two wounded and six injured, the ATO HQ press service said.

On 11 August, one Ukrainian serviceman was reported killed and nine wounded in Donbas.