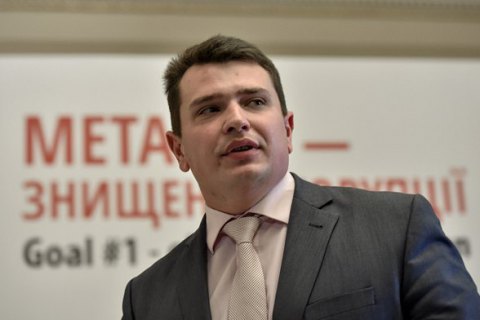 Director of the National Anti-Corruption Bureau of Ukraine (NABU) Artem Sytnyk accuses the government of trying to block the investigation of high-profile anti-corruption cases by his agency.

"You have to be naive not to realize that the government just will not leave us alone and will not forgive the things that we are investigating into. Starting from the probes into Martynenko and Nasirov down to the latest investigation of the Deputy Defence Minister and Interior Ministry backpacks," Sytnyk told reporters on Monday after visiting the National Agency for the Prevention of Corruption (NAZK), Interfax-Ukraine reports.

Sytnyk believes that his summoning was not a personal initiative of the agency's head Natalia Korchak.

"We have expected for a such reaction and a massive media attack, involving all the controlled resources, including NAZK. I will not rule out, therefore, a further use of administrative resources, suspicions, arrests, including myself," said the director of of the anti-graft agency.

At the same time, Sytnyk warned "the people who organize it all": "Guys, you can put pressure as much as you like, but you will not break us!"

Earlier this month, NAZK accused Sytnyk of corruption for using head of the legal department NABU Yarchak of attorney to represent his private interests in court. NAZK said that Sytnyk thus used the office resource for personal purposes. Sytnyk refused to provide NAZK with pertaining information and documents.

In response, NABU summoned NAZK head Natalia Korchak for questioning in the so-called "parking lot case." Last December, Ukrainian media reported that she was driving a car that she failed to mention in her income declaration.