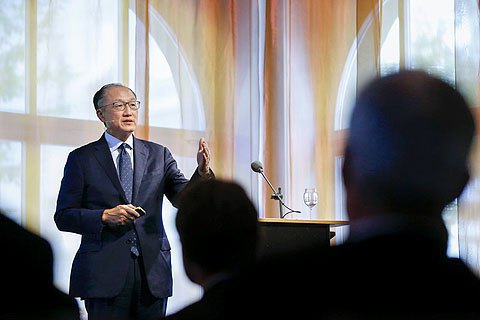 The World Bank approves the pension reform adopted by the Verkhovna Rada with the exception of several amendments added during the second reading of the law.

"We have closely followed the situation with the pension reform. I believe that its adoption is a bold step. We know that new articles have been added, and we maintain a dialogue with the ministry [of Social Policy]. The ministry explained to us that there are ways to ensure the introduction of reforms, even in its present form," World Bank Group President Jim Yong Kim told a briefing in Kyiv on Tuesday, 14 November.

"It would be better that these articles not have been added, but the reform is now a margin of safety, and it will be implemented, and pensioners will be protected," Kim agreed.

In his view, the implementation of the pension reform has shown the existence of democracy and strong leadership in the country.

On 11 October, pension reform, which provides for increasing the required length of insurance for retirement to 25 years in 2018 and an annual gradual increase to 35 years before 2028, entered into force.

Among other things, the law provides for the granting of pension starting from January 1, 2028 regardless of age with 40 years of insurance record, setting the upper limit of the base for calculating the single social contribution (ERU) at 15 minimum wages (currently 48,000 hryvnia) and the introduction of a funded level the pension system from 1 January, 2019.