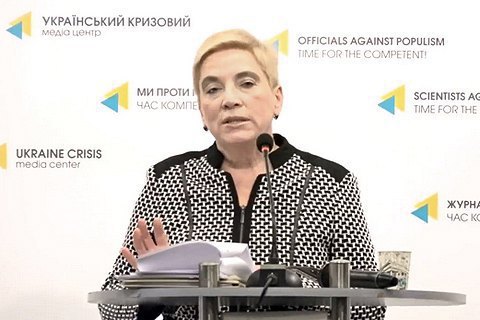 Head of financial control and Lifestyle Monitoring Department of the National Agency for the Prevention of Corruption (NAPK) Anna Solomatina said that the agency is fully controlled by the President's Administration.

"Electronic declaration [of assets and incomes] is used to cover for the officials loyal to the government, pressure on opponents, and for the personal enrichment of NAPK head and members. Audit results are falsified according to NAPK desires," Solomatina told a Tuesday briefing organized by MP Mustafa Nayem.

According to Solmatina, the agency is not an independent body but is totally controlled by the government.

"In September, the so-called NAPK curator invited two colleagues of mine and myself to the presidential administration and suggested that he pre-approved draft resolution planned to be submitted to NAPK meetings. I refused the offer," Solomatina said.

She declined to name the curator, but said she did that in a statement to National Anti-corruption Bureau (NABU)

"I can say that this is a man of high position, who is one seen as a candidate to a key position in the State Bureau of Investigation" Solomatina said.

In late September, the head of the NAPK Natalia Korchak resubordinated the department headed by Solomatina, to a loyal person. After that, this "controller" initialled all documents began, and Solomatina had to file resignation.

"The agency as it is today is no place for an honest person to work," she said.

According to Solomatina, the NAPK chief and her colleagues falsify the results of personal checks. "I have received illegal orders from the head of NAPK about full check-ups of individual deputies to make them "honest" and "clean" and close eyes to violations. I refused that," she said.

Solomatina said that she has complained to the Prosecutor-General's Office but the materials were turned down.

She believes that Korchak should be fired as the NAPK head, and called on international donors to stop supporting NAPK.