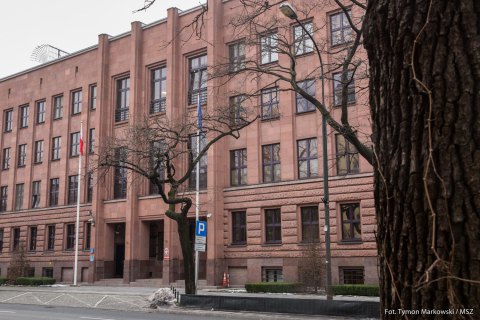 The Polish Foreign Ministry has summoned the deputy ambassador of Ukraine in Warsaw due to the burning of a Polish flag during a rally in front of the Polish embassy in Kyiv on 2 April.

The Polish Foreign Ministry filed a note of protest over the incident, it said the next day.

It said on its website that "participants in the rally were behaving in a show-off manner and there was no proper response from Ukrainian employees of the security service".

Ukrainian Foreign Minister Pavlo Klimkin condemned the incident as an act of provocation.

"I resolutely condemn the provocative actions in front of the Polish embassy in Kyiv. This is nothing else but another provocation, a cunning attack on our friendship. Sincerely-hearted people would never desecrate other nations' symbols," he tweeted.

According to Kyiv police chief Andriy Kryshchenko, a group of 5-7 masked men held an unauthorized rally. They did not shout out any slogans and had no other insignia on their clothes.

Police were called in but the hooligans had left by then.

On 3 April, the Security Service of Ukraine (SBU) said that it had detained two people who set off a Polish memorial at Lviv's Lychakivske cemetery and set a Polish tourist bus on fire.