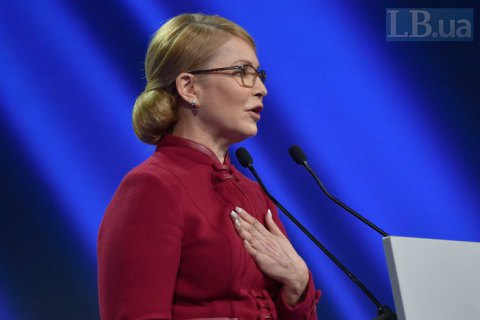 Ex-Prime Minister Yuliya Tymoshenko has announced her decision to run for president at her Fatherland party's congress in Kyiv.

"I was in power and opposition. I made mistakes. I acknowledge this. I made mistakes," she said. "Perhaps, I was wrong when I supported unreliable politicians. Today I sincerely beg my pardon. I have learnt the lesson for myself."

"Today I say with full confidence: Ukraine has exhausted its historical scope of hardships. Misery and hardships. As of today, we are starting the epoch of prosperity. That is why I am running for president today," she said.

She accused the current authorities of "heading corruption and earning on the war".

"Today's government is the hand of the Kremlin and servant of Moscow," she said.

In 2010, Tymoshenko ran for president but lost to Viktor Yanukovych. She received 45.47% of votes.

During Yanukovych's rule, she was imprisoned for what was widely seen as political motives. She was released and rehabilitated as a result of the Revolution of Dignity.

In 2014, she was elected to parliament on the Fatherland party's list.