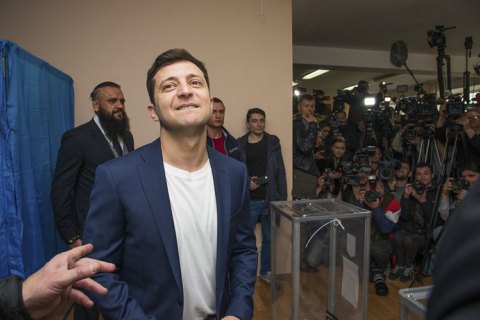 According to preliminary results published by sociologists immediately after the polls closed, more than 70% of voters voted for him in the runoff against President Petro Poroshenko on 21 April.

According to the National Exit Poll, Zelenskyy was supported by 73.2% of voters, incumbent President Petro Poroshenko by 25.3%.

The national exit poll was carried out jointly by the Kucheriv Democratic Initiatives Foundation, the Kyiv International Institute of Sociology and the Razumkov Ukrainian Centre for Economic and Political Studies. About 13,000 people were interviewed at 300 polling stations. The margin of error does not exceed 1.3%.

According to the exit poll ordered by TSN, 72.7% of voters voted for Zelenskyy and 27.3% for Poroshenko.

This exit poll was conducted by Kantar TNS and Info Sapiens at 600 polling stations throughout Ukraine. About 20,000 were interviewed. The margin of error does not exceed 0.7%.

According to an exit poll conducted by New Image Marketing Group and commissioned by the Global Management Association, 73.7% of voters supported Zelenskyy while 26.3% voted for Poroshenko.

Zelenskyy announced his intention to run for president on the night of 1 January 2019.