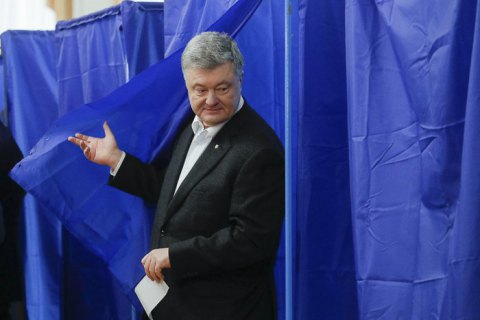 President Petro Poroshenko, who lost the presidential election, addressed his allies in the campaign HQ with a speech which they met with a standing ovation.

"Dear Ukraine, never give up - never, never, never, never, either in big or small, large or little, never give up, if it does not contradict honour and common sense. It is these words of great Briton Winston Churchill I was always guided by. Never give up - I heard in 2014 when I accepted a robbed and disarmed country from Yanukovych, which Putin’s horde was approaching, and when foreign leaders called me, they wanted not to congratulate me but to express sincere condolences. They put it straight: none of the countries in the world has faced such challenges as those facing Ukraine," Poroshenko said.

He recalled that there were far fewer people willing to become president than in the more prosperous 2019.

“Never give up - I heard when I made the decision to run for president again. It was clear how fierce the struggle was expected to be against the background of the dirty information war my political opponents waged from the inside and from the outside - Russian fake news and a powerful propaganda hybrid machine war," he said.

“Never give up - I hear even now when I see these results of the exit polls. And they are obvious and give me a reason to call my opponent now and congratulate him. To do this for the first time in Ukrainian practice, but as is customary in civilised democratic countries," the president said.

“Next month I will leave the post of the head of state. Most Ukrainians have decided so, and I accept this decision. I will leave the office, but I want to emphasise that I am not leaving politics. I remain in politics and I will fight for Ukraine,” Poroshenko announced.