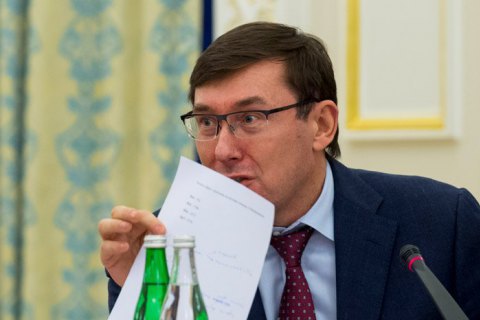 TPresident Volodymyr Zelenskyy has filed a motion to dismiss Prosecutor-General Yuriy Lutsenko, the deputy head of the presidential administration, Ruslan Ryaboshapka, has said at a briefing.

"There is a legal position based on the fact that although the law on prosecution was amended and no longer requires the prosecutor-general to have studied law, other norms of the law on prosecution says that a prosecutor of the Prosecutor-General's Office must have legal education. This person performs procedural functions, correspondingly he must have both legal education and legal experience. Lutsenko does not have such experience," Ryaboshapka said.

Speaker Andriy Parubiy and President Petro Poroshenko signed the bill into law within two hours. For the law to take effect, the parliamentary newspaper Holos Ukrayiny published an extra edition.

In 2018, the law was contested in the Constitutional Court but no ruling has been made on it yet.