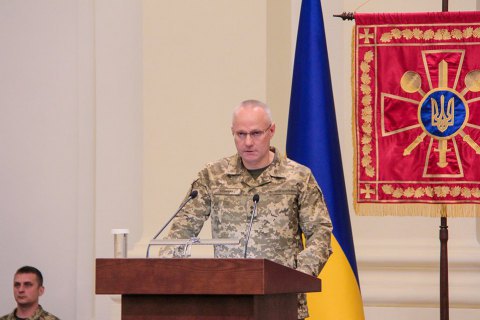 Isolated cases of ceasefire violations by the separatists in Donbas after 21 July do not constitute a disruption of the Minsk agreements on a "bread (or harvest) ceasefire", the chief of the General Staff and the Commander-in-Chief of the Armed Forces of Ukraine, Ruslan Khomchak, has said, according to Interfax-Ukraine.

"Units and detachments of the Joint Forces demonstrate a firm position on ensuring a stable ceasefire. There have been no combat losses of the personnel over the past 11 days. At the same time, there have been isolated case of violations of the silence regime by mercenaries and occupiers," he added.

He suggested that these isolated incidents did not amount to the breach of the Minsk agreements.

"Therefore, certain political speculations on this subject are inappropriate and harmful for the further fulfillment of tasks by units of the Joint Forces Operation," the head of the Ukrainian Armed Forces stressed.

However, he added that if there is a critical escalation on the line of contact, the Joint Forces are prepared to act quickly.

A full ceasefire agreed by the trilateral contact group on a Donbas settlement is in effect as of 21 July to allow the sides to complete a harvesting campaign.

For example, on 31 July, they violated the ceasefire 11 times, using heavy weapons banned by the Minsk agreements on four occasions.