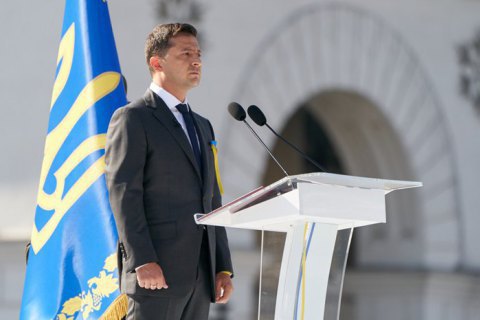 President Volodymyr Zelenskyy has not introduced a future cabinet during a meeting with his Servant of the People MPs, one of them, Oleksandr Fediyenko, has said.

According to him, they discussed bills to be put up on parliament's agenda. Most of the documents were deferred until 3 and 9 September because they were "still raw".

"Tomorrow we will have a short list of documents. The faction mostly expressed the opinion that more work still needs to be done. I consider myself a person who is not ready to vote for those bills that I have not seen," he said.

According to Fediyenko, Olkesiy Honcharuk, who is rumoured to be a top candidate for prime minister, also presented some bills and was not presented as a future prime minister.

Fediyenko said that MPs had questions about the lifting of immunity from prosecution. Tthe president replied that honest MPs have nothing to fear.

Earlier, Zelenskyy urged MPs to lift their immunity. As a result, they agreed to vote for it tomorrow.