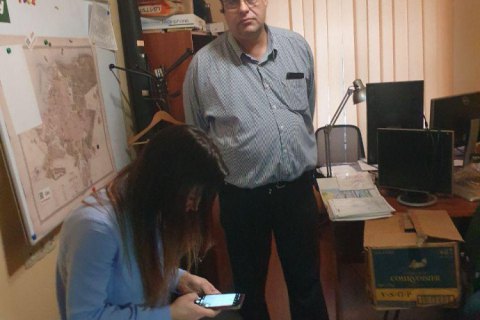 Detectives of the National Anticorruption Bureau of Ukraine has searched the office of the Odesa-based TV channel Dumskaya.

According to the channel staff, the investigative actions began at around 9.30 a.m. The staff was barred from their workplaces. Eyewitnesses said that they were pushed and prevented from filming.

"Law enforcers seize the channel’s computers and servers. According to preliminary reports, the search is carried out because law enforcers have questions to one of the owners of the building. The TV channel's management considers the search to be politically motivated and sees them as pressure on the freedom of speech in the media," Dumskaya said on its website.

Later, the NABU said on its Facebook page that the searches were related to the investigation into possible abuse of power by officials of the Odesa regional council during the sale of non-residential premises at 13 Lidersovskyy Boulevard (Odessa) to Shag Vpered Ltd in September 2018.

"The purpose of investigative actions in the premises used by the Dumskaya TV and radio company is to search for documents concerning the transfer of ownership of the non-residential premises. According to the investigation, these documents may be located at 10 Kanatna Street because the above-mentioned media and Shag Vpered Ltd had the same beneficial owners," the NABU explained.

The bureau emphasised that the investigative actions are not related to the activities of the media and journalists.

According to the National Council on TV and Radio Broadcasting, the TV and radio company Moya Odessa is broadcasting under the Dumskaya.TV logo. According to the YouControl analytical system, the owner of the company is Mykhaylo Shmushkovych, an ally of opposition MP Oleksiy Honcharenko.

Later in the day, the owner of the channel, Mykhaylo Shmushkovych, told Radio Liberty that his home was also searched.

"Already at seven in the morning they were at my place. Everything went smoothly there, I did not really understand why it was impossible to go to the TV channel with me. Later, from the conversations of the staff at place, I got the impression that they did not know why they came to the TV channel," Shmushkovych said.

He also added that the criminal proceedings, within the framework of which the NABU carried out the searches, mention two companies.

"I was told that I cannot name them during the investigative actions, but I’m not the founder of any of these companies. I consulted one of them, and I have nothing to do with the second one. I just sold them my property," Shmushkovych added.