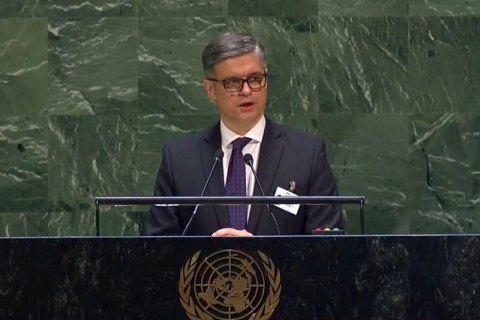 Ukraine wants peacekeeping forces deployed in the uncontrolled sector of its border with Russia, Foreign Minister Vadym Prystayko has said in a speech at the UN General Assembly meeting on the situation in the temporarily occupied territories of Ukraine.

He noted that the deployment of peacekeepers would facilitate local elections in Donbas.

"We hope to hold local elections throughout Ukraine this autumn. However, without basic security and political prerequisites, the residents of Donbas will not have the opportunity to take part in democratic elections, which should be recognized as legitimate by the Ukrainian authorities and the international community based on recognized standards," the minister said in a speech.

“That is why the principle of security is in the first place - this is the logic of the Minsk agreements - at the very center of the settlement process. Russia must immediately implement the security agreements that were reached by the Normandy Four. It is unlikely that one can hope for peace while the 400-km Ukrainian-Russian border remains an open door for the inflow of weapons by the military from the Russian Federation. An international presence on the border with a UN mandate could be the answer," Prystayko said.

The format of a peacekeeping mission in Donbas for several years has been a controversial issue for Ukraine and the Russian Federation which supports the militants.

Under Petro Poroshenko, Ukraine counted on a full-fledged mission that would take control of the entire occupied territory, including the state border. Russia only suggested a “security mission” to ensure the security of OSCE observers in the area of the contact line.

In October 2019, new President Volodymyr Zelenskyy expressed the idea of deploying peacekeepers only on the border between Russia and the regions of Donetsk and Luhansk regions occupied by it.