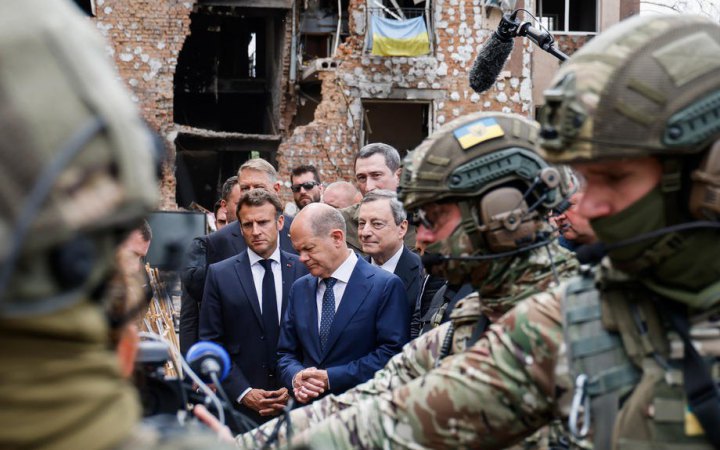 According to Oleksiy Hromov, deputy chief of the General Staff of the Ukrainian Armed Forces, the Russians will try to continue their assault in the Severodonetsk direction in order to push our units to the right bank of the Siverskyy Donets. He also noted that there is no threat of a new offensive by Russian troops against Kiev at the moment. At the same time, it is too early to definitively rule out such a scenario.

Hromov said that the Russian Federation had engaged about 330,000 people in a large-scale armed aggression against Ukraine. "Of these, the groups of the Russian armed forces in [particular] directions amount to 150,000 troops, formed out of battalion-tactical groups and other formations, and up to 220,000 troops if you take into account the air and sea component of the aggressor's grouping of troops," he said.

David Arakhamyia, head of the Servant of the People faction, said 200 to 500 Ukrainian soldiers get killed in the east every day and as many get wounded.

"Ukraine has conscripted a million people and has the ability to conscript another two million, so it is able to continue the war in Donbas, where Russia is gradually conquering territory," Arakhamiya said.

Ukrainian defenders shot down an enemy Mi-24 helicopter in the Zaporizhzhya direction.

The entire territory of Luhansk Region is under targeted fire from Russian troops.

Hundreds of Lysychansk residents are sitting in basements without food or water.

Around 500 people remain in the shelters of the Azot plant in Severodonetsk. Both civilians and the military are staying there. There is no stable contact with the enterprise.

Two communities in the Kryvyy Rih district came under fire.

The invaders said that as of 1 September, the Zaporizhzhya nuclear power plant will come under full Russian control, Enerhoatom said. The Ukrainian company stressed that this statement had "nothing to do with reality, there will be no control over the operation of the Zaporizhzhya NPP by the hostile forces".

Ukrainian intelligence has made public the intercepted technical documentation of the Crimean bridge. The documents contain detailed information on the terrain, road surface, piers of the bridge, etc. Judging by this report, Russians should expect surprises...

Iohannis tweeted that he had arrived in Kyiv to show "strong support and full solidarity with President Volodymyr Zelenskyy" alongside his European colleagues.

French Foreign Minister Catherine Colonna also visited Ukraine today. "This is a very important day for Ukraine, for Europe and for the stability of the world. Believe me," said Catherine Colonna upon her arrival in the Ukrainian capital.

Macron, Scholz, Draghi and Johannis visited Irpin. The four leaders checked the sites of destruction left in the city by the occupiers.

Following a meeting with Ukrainian President Volodymyr Zelenskyy, the leaders of Germany, Italy, Romania and France spoke in favour of "immediate" EU candidate status for Ukraine.

Britain has put Patriarch Kirill (Gundyaev) of the Russian Orthodox Church on a sanctions list for supporting and endorsing the war against Ukraine.

Also on the list is Maria Lvova-Belova, the Russian ombudsman for children's rights, due to the forced removal of Ukrainian children and their further adoption in Russia.

The Lithuanian Seimas has recognised the forced relocation of Ukrainians to Russia as deportation of the Ukrainian people and called on the international community to do the same and seek accountability for these crimes.

The Ukrainian parliament has registered draft resolution No 7470 on a statement on ensuring guarantees of freedom of speech and the rule of law with regard to journalists and mass media as key criteria for Ukraine's accession to the European Union.

The initiators of the draft resolution urge their colleagues to urge the state authorities to take all measures depending on them to ensure guarantees of freedom of speech and to immediately resume broadcasting of the Espreso, Pryamyy and 5 Kanal TV channels in digital television broadcasting in accordance with the valid broadcasting licenses.

The Eighth Court of Appeal in Lviv outlawed the Shariy Party today.