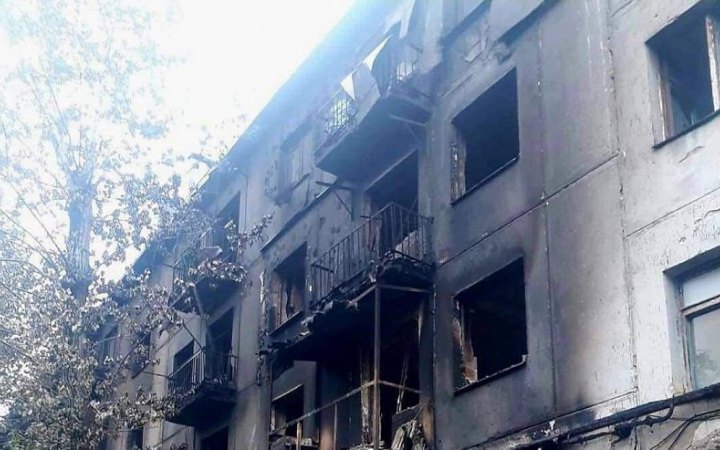 The General Staff has said that over the past 24 hours the Ukrainian Armed Forces have destroyed at least 30 units of various equipment and weapons of the enemy. The bombing of the occupiers' ammunition depots continues. An increase in the number of Russian military desertions has been recorded.

The enemy continues to concentrate its main efforts on the offensive towards the town of Slovyansk, fighting continues. An unsuccessful russian assault on Severodonetsk continues.

On the night of 18 June, russia fired rockets on Poltava Region, hitting an oil refinery and other infrastructure in Kremenchuk, Poltava regional military administration head Dmytro Lunin said on Telegram.

"Six Russian missiles hit the Kremenchuk oil refinery, which was already out of operation, and two missiles hit the thermal power plant. Fortunately, there were no casualties. This is not the first time the enemy has attacked these facilities. Rescuers are working at the site," Lunin said.

He added that during the full-scale war the refinery and the thermal power plant suffered the most among all infrastructure facilities in Poltava Region.

According to a spokesman for the Odesa regional military administration, Serhiy Bratchuk, the enemy missiles were launched from the territory of temporarily occupied Crimea.

In Luhansk Region, the enemy launched air strikes in the areas of the villages of Syrotyne and Borivske, the chairman of the Luhansk regional military administration, Serhiy Hayday, said.

"Our soldiers successfully repelled the assault near Syrotyne and Metyolkine. The occupiers withdrew to the previously occupied positions, taking losses. The same is near Hirske," Hayday noted.

Overnight, explosions were heard in Russian-occupied Berdyansk, Zaporizhzhya Region, and part of the city was left without electricity.

Residents of Kherson Region have been asked to leave the region to make it easier for the Armed Forces of Ukraine to liberate the temporarily occupied territories.

According to Oleksandr Samoylenko, head of the Kherson regional council, "everyone saw the agony of the occupiers before they left Bucha and Irpin, or how the Russians 'liberated' Mariupol, completely destroying the 400,000-strong city".

Samoylenko added that for Kherson such a liberation option is unacceptable, and the president, the army commander-in-chief and the defence minister understand this.

Norway has decided to join the ban on Russian oil imports.

"We support the European Union in imposing sanctions against Russia in order to put pressure on the government of that country and its leadership. Now we are banning the import of oil from Russia to Norway via sea routes," its government said.

The Kyiv Conservatoire has spoken in favour of retaining Tchaikovsky's name. The Academic Council of the National Music Academy of Ukraine supported this move unanimously.

In an appeal to the president and the Culture and Information Policy Ministry, it spoke about "the danger of manipulating the name of Tchaikovsky as an imperial narrative" and also asked them to "support all measures to return the composer with Ukrainian roots to Ukraine, to protect his heritage from being used by the aggressor as a tool to destroy the Ukrainian essence".

We shall remind you that in March the rector of the National Academy of Music, Maksym Tymoshenko, spoke out against the cancellation of concerts of Russian music in the world in an article in The Independent. "Modern Putin's Russia has nothing in common with the great Russian culture," he said.