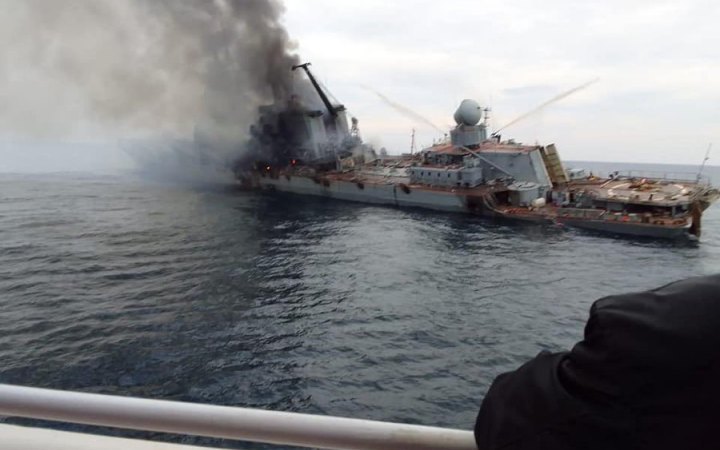 The Russian Federation refuses to admit the death of 27 crew members of the Moskva cruiser Moskva, which sank in the Black Sea on 14 April, the Ukrainian Defence Ministry's Main Intelligence Directorate said on Telegram.

"Officials and special services continue to force the families of Russian sailors to keep mum about their relatives who died on the Moskva. The 27 crew members, including 19 conscripts, are still considered missing. Only senior chief petty officer [michman] Vakhrushev has been officially buried in Sevastopol," it said.

The intelligence directorate noted that the cruiser's commander, Captain 1st Rank Anton Kuprin, "in violation of the charter, was one of the first to leave the ship and explains his act as an attempt to save the conscripts. He allegedly received such an order after the explosions on the ship."

Both the command of the Russian Navy and the command of the Black Sea Fleet, as well as the authorities and social security agencies, refuse to receive relatives of the dead crew. Instead, they are advised to contact a group of psychologists, medics and lawyers specifically created to conceal information about the dead and missing conscripts of the occupying forces.

"Having learnt that the relatives want to share information about the dead in the media, FSB officers come to their homes and workplaces and conduct 'explanatory work' with threats of criminal liability for disclosure of state secrets," the Main Intelligence Directorate said.

The cruiser Moskva sank in the Black Sea while being towed on 14 April. Ukraine's Operational Command South confirmed that the cruiser, which had been hit by a Ukrainian Neptune cruise missile, had caught fire and sank.