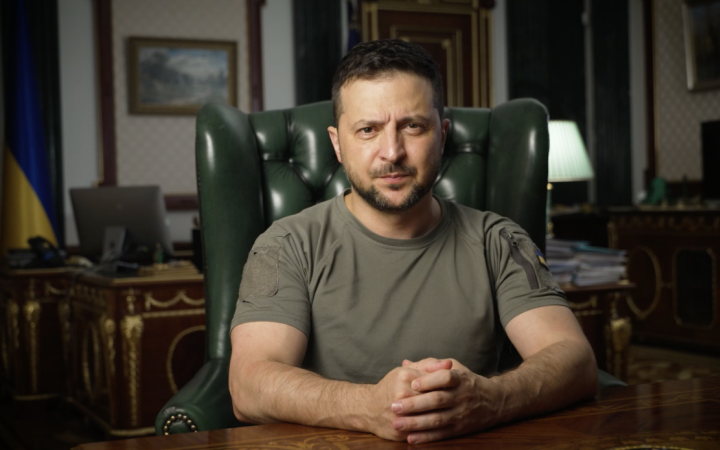 Within the ongoing defence operations, Ukrainian troops have already liberated dozens of settlements. And today this movement continued, there are new results, President Volodymyr Zelenskyy said in his regular video address following a meeting of the Staff of the Supreme Commander-in-Chief today.

"In total, more than a thousand square kilometres of our territory have been liberated since 1 September. I am grateful to everyone who made it happen! I am grateful to the army, intelligence officers, and special services for every Ukrainian flag that has been hoisted these days," he said.

"We listened to the reports of the commanders of operational areas at the meeting today, there are certain decisions. The Staff will continue its work in the format of such fairly frequent meetings, so that our commanders on the ground have full support at all levels and so that the Armed Forces of our country, intelligence and the entire defence and security sector receive all the necessary resources, all the necessary material, political, information, diplomatic and any other means for the effective defence of Ukraine and the expulsion of the occupiers.

All state activity is focused on the needs of the front and protection of our people," he said.

Zelenskyy "once again called on those who inform the society, who comment on the military situation: please analyse the whole picture, express gratitude and support to all our defenders, do not forget about any of them".

Zelenskyy dedicated a large part of his speech to his foreign contacts.

US Secretary of State Antony Blinken paid a visit to Kyiv today to hold negotiations which were very useful for both our countries, he said.

He thanked Blinken for his personal role in helping Ukraine, President Biden for the decisive and effective leadership; the US Congress for the unwavering bipartisan and bicameral support, and every American for their sincere understanding of Ukraine's struggle.

"We have President Biden's decision on a new $675 million defence aid package. It was also announced that Ukraine will receive more than a billion dollars from the general package of support for European democracies. Each of these steps of our partners has a real impact on the strength of our state and the whole of Europe in defence against Russian terror," Zelenskyy said.

Zelenskyy and Blinken discussed political cooperation, financial interaction - macroeconomic support is now as important as support with weapons and ammunition – as well as the Fast Recovery Plan and, in general, to the reconstruction of Ukraine after the Russian strikes.

"I've raised the issue of officially designating Russia a terrorist state. The legal reality must always correspond to the actual reality. And it is a fact that Russia has become the biggest source of terrorism in the world. You can choose one or another format of procedures, one or another formula of legal pressure against Russia for terror, but the world must receive an unequivocal signal that Russian terror will not be forgiven," Zelenskyy said.

He once again expressed condolences on the death of Queen Elizabeth II.

"It is with deep sadness that I learned of the death of Her Majesty Queen Elizabeth II. A great loss for all of Europe, for the world. On behalf of the people of Ukraine, I extend condolences to the Royal Family, the entire United Kingdom and the Commonwealth. Our thoughts and prayers are with you," he said.

Zelenskyy said he continued to establish new ties for Ukraine.

"I had a conversation with the President-elect of Kenya, the first conversation in the history of relations between our states. I congratulated him on winning the elections, and we agreed to enhance cooperation. We also talked about overcoming the food crisis - we are doing everything for this," he noted. "Just today, four ships with agricultural products for Asian countries left our ports. At these hours, more than 65 thousand tons of wheat enter the port of Sudan for unloading. Yesterday, a bulker with wheat departed for Kenya - more than 50 thousand tons. Vessels for Lebanon and Libya are now being loaded in Odesa. In the Pivdennyy Port, a ship bound for India is waiting to be loaded... That is, the geography of Ukrainian agricultural exports by sea is very broad."

Literally every working day of the grain export initiative refutes Russian lies about it, he stressed. Ukraine supplies agricultural products to consumers from different continents. "And it is our supply that guarantees food security at the global level," he pointed out.